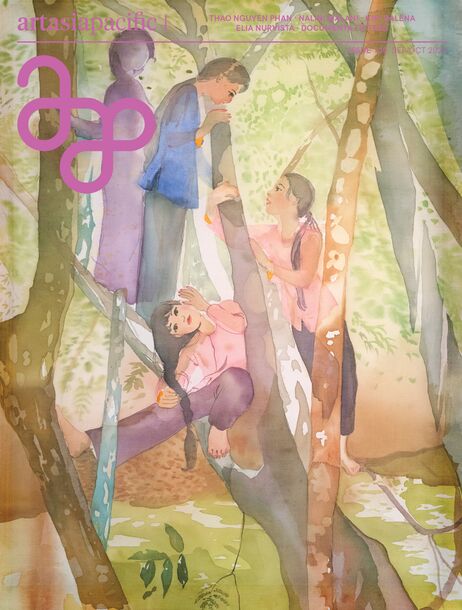 Are there alternatives to fighting power with power? The simultaneously whimsical and disturbing images of ArtAsiaPacific’s cover artist for Issue 130, Thao Nguyen Phan, suggest that there are. In her interview with associate editor Pamela Wong, Phan discusses how her multimedia projects revisit dark chapters in Vietnam’s history through folklores, oral histories, and prosaic accounts, and thus open official narratives up to poetic interpretation. Similarly, in her moving-image works, Nalini Malani foregrounds the effects of war, violence, and the repression of women while eschewing what she calls a “slogan-esque” approach. The acclaimed multimedia artist elaborates on art’s unique functions beyond didacticism and her preparations for her solo exhibition “Vision in Motion” at M+ in the second Feature. In Up Close, the editors delve into recent projects by Heidi Lau, Boo Sze Yang, Monique Yim, and Serene Hui Sze Lok. Lisa Movius, for Inside Burger Collection, reflects on the works of seminal artist Song Dong. Profiles examine the practices of socially engaged artists Kiri Dalena and Elia Nurvista. Imaad Majeed files a Dispatch from Colombo, where mass protests, initially sparked by rising living costs, continue to surge through the country with unprecedented support. In the Point, former art professor Kurt Chan argues how the pandemic could be an opportunity for Hong Kong’s universities to revamp their methods for teaching visual arts. Where I Work visits the Geneva studio of Mai-Thu Perret, whose sculptures and paintings speak to the experiences of womanhood through allusions and references. For One on One, artist Jakkai Siributr pays homage to the Gee’s Bend quilters, who use the quilt form to express their identity and experiences, in the face of the harrowing racism of the Deep American South. Besides encouraging us to recognize the multivalent nature of our world, the artists of this issue affirm that there is a time to reflect and also a time to act.