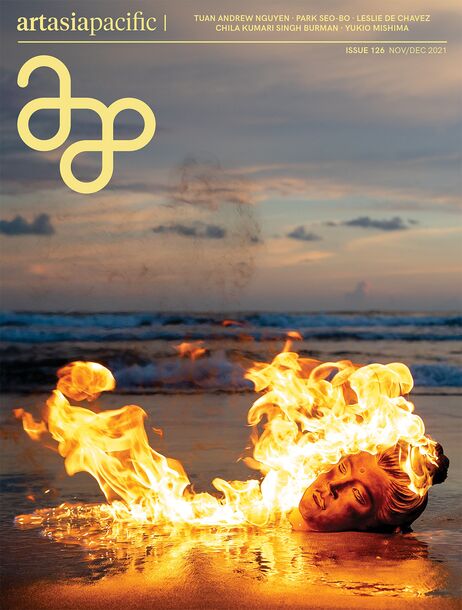 The November/December issue looks at artists who have devoted their practices to creating space for reflection, reconnection, and healing. Our cover feature is a conversation between Tuan Andrew Nguyen and associate editor Ophelia Lai about the role of voice and song in the Ho Chi Minh City-based artist’s recent film works. For the second feature, deputy editor HG Masters spoke with pioneering modernist painter Park Seo-Bo, who looks back on his career on the eve of his 90th birthday. Closing out the Features section is Up Close, where the editors spotlight new works by Lee Kai Chung, Bani Abidi, and Yao Qingmei. In Profiles, we trace the choreographic practice of Berlin-based Choy Ka Fai, and the politically engaged art projects of Leslie de Chavez. In his essay, Hutch Wilco interviews the organizers behind some of Shanghai’s new grassroots art initiatives about their strategies and motivations. The second Essay looks at the evolution of the archival turn, with a focus on “Portals, Stories, and Other Journeys,” an exhibition rooted in the repository of materials compiled by artist Ha Bik Chuen. The issue also includes a studio visit with Chila Kumari Singh Burman in London; an article by artist Monira Al Qadiri, who describes her fascination with novelist Yukio Mishima; and more.